You Are A Knight officially released on iOS!

After years of being buried due to some challenging legal issues. You Are A Knight, or YAAK as I like to call it, has officially been released to the app store!

For those of you living living under a rock, YAAK is the spiritual successor to the popular browser and mobile game series Swords & Sandals. The brain child of talented developer Oliver Joyce.

We had the pleasure of being part of the early Alpha and Beta releases which were absolutely badass.  The game plays as a turn based strategy brawler:

Start as a peasant and turn him into one of the greatest knights in the realm! You will fight other knights, joust, go on quests and get up to all sorts of chivalrous mischief in this light-hearted adventure. 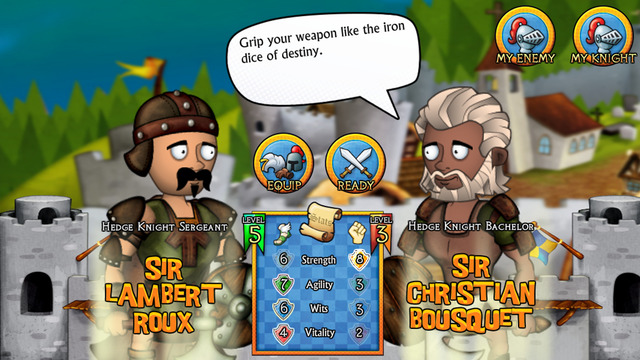 You Are A Knight features
* Fast paced, turn-based combat. Each battle lasts under a minute!
* Fight, joust, go fishing, perform noble deeds on your journey to knighthood
* Fifteen tournaments featuring great historical knights like William Wallace and Richard the Lionheart
* Build up your knight through 50 character levels and learn powerful abilities like ‘Cleave’ and ‘Smite’
* Go on over 60 quests and attract followers such as The Vampire, The Baker and The Silver Stag
* Buy weapons, armour, potions and magical items from four different shops
* Over 170 achievements to earn and collect
*Hundreds of interesting trivia facts to learn about the middle ages

here is a statement from the developer Oliver Joyce:

“At long last, here we are.

Three years after its inception, my magnum opus “You Are A Knight” is finally live on the App Store.

The tale behind this game’s development is even more storied than the game itself – full of intrigue, heroes, scoundrels, turns and twists. A story of highs and lows ( including a very high Tony Lowe). Many of you know the story but ask me over a beer sometime and I’ll regale it in more detail. Many thanks to those who stuck with me through this game’s tumultous development.”

Grimoire - an indie game 20 years in the making