This week I had the pleasure of  play testing and reviewing Jump Jack, a new platform runner that dropped on iOS and Android, courtesy of the talented siblings at Rossman Bros Games.

I can hear you moaning, “Another endless runner”. It is true. There are way too many endless runners / run and gunners (and every over combination of the genre) currently flooding the app stores.
But how many of these are actually worth playing? How many take you on a nostalgic roller coaster ride back to the ‘true golden era’ of games.  Running this website, I have seen it all…
Jump Jack differs from all the trash out there, in that, not only is it a well crafted game, with tight level design and polished audio and visual ; but it has something most other games don’t have. It has heart.

It is the epitome of ‘indie’. Two brothers making a game in their spare time, between looking after their kids and full time jobs. Having fun, creating fun. 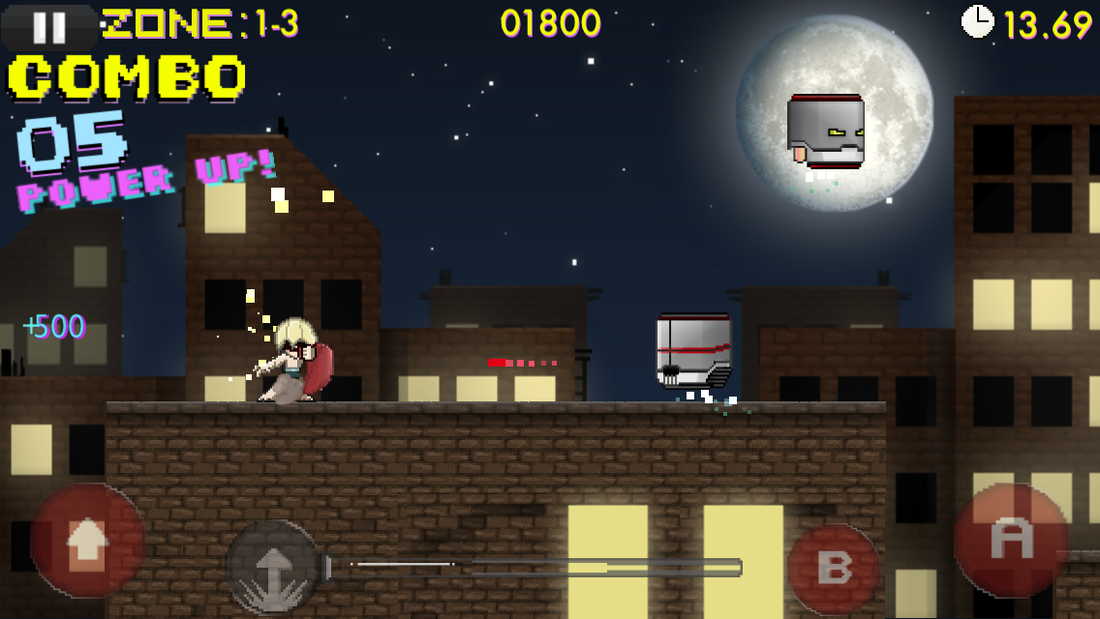 The game plays out over four environments, each with five carefully crafted levels to test your skills in.
You take control of the protagonist Jack, as he embarks on a journey against alien robots to save his sister. It’s a simple back story that gives the game some context without interfering or delaying your progress. Jump, shoot and blast robots on land and from the sky to build up combo scores and eventually reach the ever elusive flag at the end of the level.

The game reminds me a lot of Mega Man, from the buster like weapon to the environments and enemy design. Being a big fan of the retro  Mega Man series, Jump Jack really scratched that itch I had for a fast paced platformer that isn’t shy about serving up the pain.

The game has 3 difficulty settings to choose from, and me being a boss, chose the hardcore (classic) setting.  Man, it was an ordeal. The amount of sh!t F@cks I spat out might have broken some record (in my neighbourhood at least). HARD.. but I loved it!  You see, the level patterns are not random mish-mash like most runners these days, they are thoughtfully hand crafted,  so through repetition you can improve until you eventually get it right –  and when you do… that moment is golden!

There is a lot to be said about the level design in Jump Jack, it knows how to tease you, when to reward you..  and when to troll you. I rage quit on at least 3 occasions! 🙂
Each jump and enemy position has that ‘hand made’ feel, and sometimes you just know the game designer was having a good ol’ laugh. 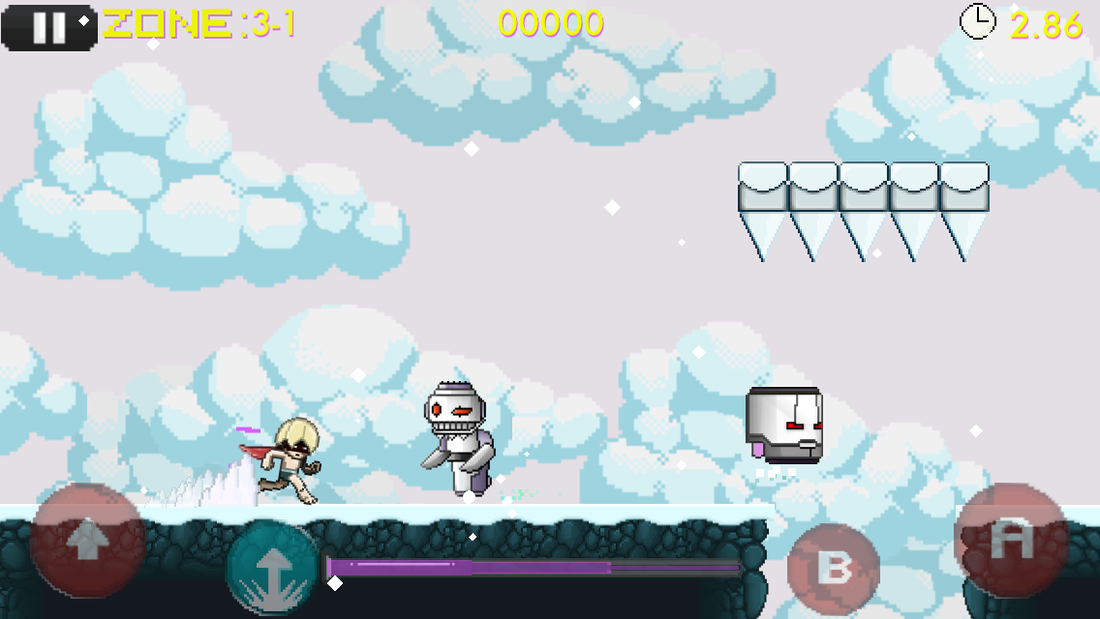 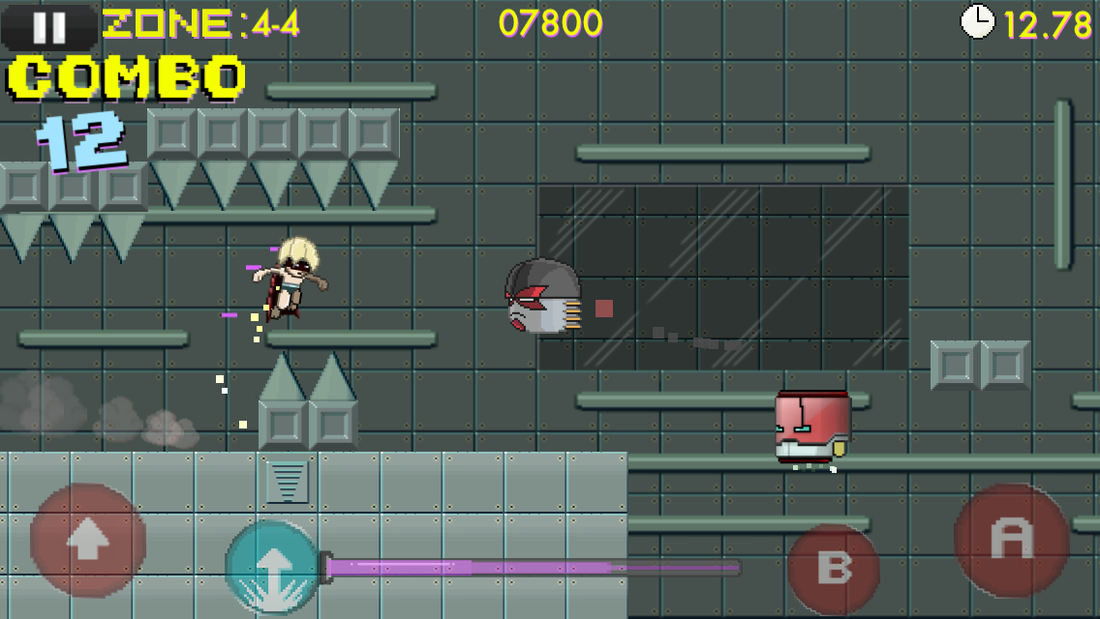 So lets get to the nitty-gritty.
I don’t have too many criticisms of the game, I can judge it only on what its trying to be: a simple yet challenging run n’ gunner – and that it does relatively well.

I found the games down-force gravity when coming out of a jump to be a bit too harsh. It doesn’t match the up force, and more often that not I blamed this jump mechanic for losing. When I die in a game I want to feel that it was purely my fault, as that is something I can control. As a game designer myself, I believe it was done intentionally to match the games speed/balancing, and I have seen something similar in other games like Jack B. Nimble. I can’t help but think it could less exaggerated and still work within the game’s flow.

Controls: The game has a pretty robust control system for this style of game. You have your typical jump and shoot buttons, then a secondary ‘shield’ button. These 3 work pretty well together, and with the pace of the game is about all I can concentrate on without going full retard. The game however has two more controls… you can hold down jump to ‘sprint’ and do some kind of super jump which is tied to a gauge.  It’s a little vague to me and I never found myself using the sprint or super jump. I personally just don’t think its needed. KISS yo.

My third item of constructive feedback would be about the difficulty curve. I love hard games. I grew up in the 80’s and have excellent finger dexterity.  I did however hit a road block on level 3-1.  I must have attempted it about 50 times to no avail. As I mentioned earlier, the game has 3 difficulty settings, of which I picked the hardest.  Realizing I wasn’t going to beat level 3-1 on my current setting, I considered going down to the next difficulty tier. The problem is, you have to start from level one in that tier to do so.
But that is the name of the game. And it was not uncommon to try and fail on a level 50 times on Ninja Gaiden back in the 80’s –  alas, I’m now 32 years old and just cannot factor in such resistance in my casual gaming binges. Then again, perhaps I suck and you guys can beat it on the first go,  go on.. I challenge you. (I have a good feeling about today though, my caffeine and sugar levels are in perfect harmony).
Minor critiques aside, I can say I really like this game and what Rossman Bros have done with it.  The game is very addictive and does a good job stimulating your brain’s pleasure receptors. You easily get your penny’s worth. I’m sure the dev’s will continue to support their creation and expand/update it over time.

I encourage you to get this game and remind yourself what a ‘premium indie game’ is all about. It will send you into fits of hysteria if nothing else. 🙂

In a market full of shady games filled with IAP and pop up ads, it’s refreshing to see dev’s releasing their game for a one off price with no catches.  Well done boys, it’s been fun. 8/10